Stations appear in the Radioplayer system by having a desktop web player (called ‘console’) and by submitting information (metadata) and images that are compatible with certain specifications.

By providing compatible information the station will appear correctly in search results and in the mobile apps.

The stations must provide audio streams in a compatible format so that the mobile apps and web player can play correctly.

The stations can host their own web player, or they can ask for the Radioplayer system to host their player as long as it is isn’t customised beyond the options allowed by the ‘console generator’.

The console generator is accessed through the ‘Station Control Panel’. This is a web site that member stations can log into to manage a basic copy of their metadata and to generate simply customised copies of their console.

The result of generating a console is a ZIP file that contains a fully working copy of a console that only needs hosting on a web server.The generated console can of course be further customised by the station’s web developers if that is required.

Each station must provide a minimum amount of metadata so that they can appear in search results and in the mobile and tablet apps.

The Station Control Panel allows stations to log in and contribute the minimum data easily.

If a station wishes to take greater control over their metadata they can also generate their own XML files which must conform to the Radioplayer Metadata Specification. More detail on how to submit metadata , including the metadata specification , can be found in the Radioplayer support knowledge base.

A station needs to have prepared a version of its logo in the following dimensions: 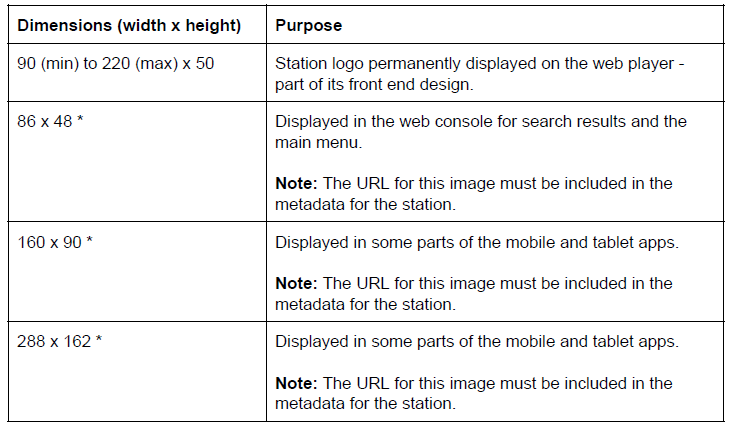 * When a station wants to use the station control panel to manage its metadata then the following images are automatically created from a single large image uploaded by the station.

There are a few different environments where a station’s audio stream may be used. The supported audio and playlist formats are listed on the Radioplayer support knowledge base.

Radioplayer Knowledge Base has written 40 articles

We’ve put together a handy guide to get you set up quickly in Radioplayer. As you know, the Radioplayer console is a browser-based application which is hosted by your station, so before you begin, you’ll need someone who knows their way around your website and has FTP access.

To find out more about Radioplayer Canada:

How to submit metadata to Radioplayer

Cloudflare and the Radioplayer Web Console

Help! My console has been blocked by Google

Standard Information and Requirements for Stations